Spring Break at the Villa Hermes 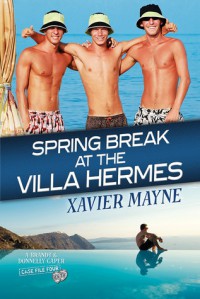 While the last two books in the series dealt with more serious and heavy issues that the original, this book has more of the feel of [b:Frat House Troopers|16159818|Frat House Troopers (Brandt and Donnelly Caper, #1)|Xavier Mayne|https://d.gr-assets.com/books/1353359396s/16159818.jpg|22000794]. There was no real mystery or crime in this one as Brandt and Donnelly spend the book on vacation, although we do get a glimpse of them in full on cop mode.

Once again the focus of the main story introduces a new set of characters, a group of six seemingly straight college seniors celebrating their last spring break together. They have been unknowingly booked into three of the four rooms in a small bed and breakfast resort, run by partners Winnie and Vic, that caters to gay clients. The fourth room is occupied by Brandt and Donnelly. As the guests spend time together, Donnelly soon finds himself mentoring quiet Ted, who has a crush on his best friend Bark.

I simply adored the group of guys that were introduced. They are all quite different and all have some secrets and surprises for the others, most of which come out during a tropical storm induced sleepover session in the hotel's storm cellar. Bark and Ted are incredibly sweet and the antics of their housemates Paul, Thor, Chad and Howie had me laughing out loud while the flamboyant Winnie and laid back Vic were like the Mamma and Pappa bears taking care of their charges.

While I always want more alone time with Brandt and Donnelly, we do get to see them in a particularly eye opening moment discussing how they view their sexuality followed by the unleashing of a side of Donnelly I don't think we've seen before.

Xavier Mayne's books are always well written with plenty of humor and romance. The story was full of well rounded secondary characters who each had a story to tell. I loved the alone time with Donnelly and Brandt and Ted and Bark and would like to see that reunion somewhere down the line. There are small cameos from Bryce, Nestor and Mal, and references to a future bachelor party and wedding that I hope to see very soon.