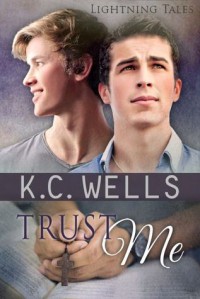 Ric realizes he is out of time and excuses and will either have to sacrifice himself to his sense of family obligation and enter the priesthood, or admit that the feelings he has been denying are real and choose a new path. At the wedding of a friend from high school he runs into his former best friend and first crush Connor and realizes his attraction still strong. If that's not enough, seeing Alex happily together with their former teacher Nick, and Ric's mother's reaction to them, leaves him even more distraught about his future.

Connor is engaged to Keira, but they’re not quite the happy couple their friend think they are. When he sees his former best friend Ric after so many years apart he’s not going to be pushed away again, even if he has to come clean and apologize to him about the high school crush he believes drove Ric away. One night together that seems so perfect goes wrong the next morning and Ric is gone again.

I can't pretend to understand why parents put such burdens on their children, but since announcing at age 11 that he wanted to be a priest just like his uncle, Ric's family has expected nothing less. I could feel the pain and crushing weight of the obligation Ric felt and the damage it was doing to him. Connor's situation was easily dealt with and I loved his complete support of Ric. Their old connection is quickly rekindled and when they are together things are both steamy and sweet. This was really Ric’s story and it was angsty and emotional, with some unexpected responses to Ric’s decision from both his mother and uncle. It was realistic in that not everything is neatly tied up in a bow at the end, but the two men do find happiness together.

An ARC of this story was provided for an honest review.