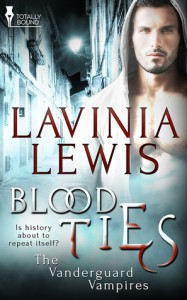 This first book in a planned trilogy is a somewhat different take on vampire lore than I’ve read before. In this world there are born vampires who live more like humans and made vampires, who are the ones that cannot go out in the sun or eat human food. The made vampires also differ from each other, sometimes losing part of their human self, even to the extent of becoming mindless killing Drones, but it is not until after their transition that the maker knows what they get. Set in the midst of a centuries old war between two vampire families, the book starts off with Thomas, a vampire prince at the side of Daniel, his formerly human lover who is in the midst of turning, and then flashes back over the past year from the time they met.

There is plenty of action as Thomas and his warriors fight the Gemelli family Drones and it soon is clear that even after centuries of fighting, nobody is safe. Thomas is still mourning the death of his lover 200 years prior at the hands of the Drones. As much as Thomas tries to fight his attraction, he has met his match in Daniel, who is not afraid of Thomas and challenges him in ways he never expected. I loved how Daniel’s alpha personality kept him pursuing Thomas no matter how much he was pushed away. His ability to see things clearly, from the outside of the conflicts, was a nice counterpoint to Thomas’ emotional reactions.

The story had plenty of action and drama, some humor and a few turns I didn’t expect. While I wouldn’t really characterize the end as a big cliff hanger, there are story lines left open and a reminder that someone is presently unaccounted for in the final scene. While there is progress made towards peace between the warring families, it is clear that not everyone is on board with the plans. Mostly what I am looking forward to in the next book is seeing more of Daniel as a newly made vampire since the moments following his awakening didn’t allow for much introspection.