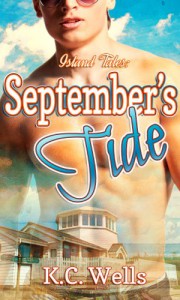 This is a straightforward, low angst story of two men falling in love. Although this is #2 in the Island Tales world, it is a standalone story.

Bestselling author David Hannon hasn't been able to write a word since finding his lover in bed with another man. Five months after kicking Clark out, he has shut himself away in his NYC apartment. His agent arranges for him to spend a month on a quiet island off England so he can get his act together. This is where he meets Taylor Monroe, his neighbor and the owner of a sports rental business on the beach. Taylor is 20 years younger than David, but has a thing for older men and it is quickly clear that both men are attracted.

Being a gay man on a small island, Taylor hasn't had a long term relationship and knowing David is only around for a month the men come to an agreement to have a no strings attached relationship for the duration. As the two spend time together, it is apparent that they are well-suited for each other and as David's time on the island nears an end, they both realize that maybe it has become more than "just sex". Enter Clark, who manages to track down David in an attempt to get him back.

One thing I love about K.C. Wells is her ability to infuse such chemistry into the relationships. Also, though the men fall into bed right away, there is a nice slow build to the relationship. While the story is low angst and void of the serious issues addressed in some of the author's other books, there are some bumps in the road that Taylor and David must deal with. Overall, if you want a nice love story with a beautiful setting, this is a perfect read.
Tweet