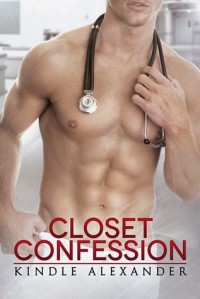 This short is seriously sweet and sexy. I won't go into plot details since that would ruin the fun, but the first part of the story, which was originally part of the “Night Shift: Dirty Things Happen in the Dark” anthology, takes place during a night shit at the ER of Tulane Medical in New Orleans. Dr. Derek Babineaux aka Dr. Baby is right there with the other nurses ogling new employee Justin Delacroix. Justin is a nurse, recently out of the military and trying to adjust to civilian life. Both Derek and Justin have secrets and insecurities, but one super steamy encounter in a supply closet could change both of their lives.

Both characters’ points of view are included which really adds to the story. Justin is clearly struggling with more than just his new life, while Derek seems to have everything together. I had my suspicions about Justin and was pleasantly surprised when all was revealed. Both the vulnerable Justin and the take charge Derek are good characters and when Derek finally decides to take a chance he doesn’t do anything by half measures!

If you previously enjoyed the original you're going to want to read the new version since there are a few added chapters that continue the story, as well as showing past important moments from the men's lives. If you haven’t read it yet and you like a coming out story with steamy sex scenes that lead to men having emotional epiphanies I’d recommend it. The story is short and left me very happy. I came to really like both characters and could have easily read more.