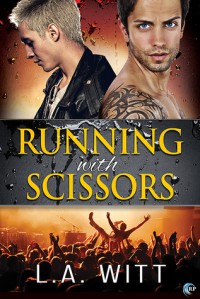 While this wasn’t the raucous, hard-partying, rocker book I was expecting, and it definitely was more of a slow burn and lower on the steam factor than some other L.A. Witt books, I really enjoyed it. The story focuses less on the rock star lifestyle and more on the personal relationships among the band members, most of whom have been together since they were kids.

Ever since musical prodigy Jude abruptly quit the band, Running with Scissors, 18 months ago on the heels of a bad breakup with his boyfriend Connor, their volatile lead singer, he has regretted that decision. They replaced him with a new drummer and now they’ve released an album and are touring as the opening act for a popular rock band. When the band’s manager calls him to fill-in after their bassist (another of Connor’s boyfriends) quits, Jude reluctantly agrees to join the band on their tour. While he will be living out his dream, the way he left Connor and the band guarantees him an icy reception.

Although A.J. has been the band’s drummer since Jude quit, he still feels like an outsider to the tight group of friends and is in a panic that Jude’s return is going to result in him losing his position. A.J. is the peacekeeper in the group, he is quiet and doesn’t like to speak out for himself, but being on the road is lonelier than he thought it would be and Jude is more of a distraction than A.J. could have imagined.

There is an instant attraction, but the biggest rule Jude was given on returning was to keep his dick out of the other band members. Jude fully accepts the blame for his prior actions and intends to honor his new commitment. What Jude didn’t count on was effect A.J. the quiet drummer who replaced him would have. Their attraction quickly grows, and A.J. makes his interest known, but the two manage to hold back. They spend time together as friends and it becomes obvious that they are very in sync both musically and personally. Their chemistry eventually leads to a sizzling backstage kiss but both agree it’s a bad idea to get involved and try to leave it at that. It’s somewhat easy to live with the simmering attraction and keep a distance when they’re all living together on a tour bus, but when the tour ends, and privacy becomes a possibility everything changes and Jude and A.J. are soon risking their careers with the band to be together.

L.A. Witt infuses the first part of this book with a lot of sexual tension. I loved the scenes of musical foreplay between the men and when they do get together, it was definitely worth the wait. The side of A.J. that is unleashed on stage and in bed is at complete odds with the quiet man we first see. While the sex is hot, I loved the quiet moments between them as well. It is clear that they would do anything not to jeopardize the band, but also quite clear that their feelings toward each other ran deeper than just the sex.

Of course they can’t keep things hidden forever and when everything comes out, Jude’s flight instinct once again tries to take over. Not wanting to have a repeat of his and Connor’s falling out, Jude and A.J. try to make a professional, adult decision and put the band’s interests first. The pain that decision causes is evident and the dual point of view really worked for me here and had me wanting to wrap A.J. up in a hug.

The romantic relationship is not the only focus of the story. The band members have known each other since elementary school. There is a lot of history and a lot of bad blood between them, and nobody is quick to forgive or accept Jude’s return, adding another layer of tension to every decision Jude and A.J. make. While everyone tiptoes around Connor, the common denominator in both Jude and Wyatt leaving, they have no problem jumping all over Jude for his actions. Jude knows he made bad decisions previously and resolves not to let something like that happen again, but the toxic atmosphere also has him wondering if it is worth it and his desire to protect A.J. is also something new to deal with.

This was another winner for me from L.A. Witt. I’m not sure if she ever plans to tell Connor or Richie’s story, but I wouldn’t mind spending some more time with the band.