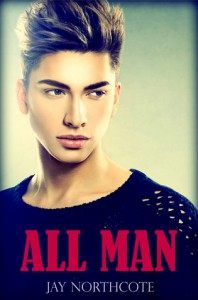 Review originally posted at Sinfully... Addicted to All Male Romance.

This short and sweet, opposites attract story between bearish plumber Gareth and the slight, put together hair dresser Jules is a wonderful way to spend an hour. Although Jules briefly appeared in the author’s short, Top Me Maybe?, about co-worker Tyler (who does appear in this one) this short story completely works as a standalone.

Jules is immediately smitten with Gareth when he shows up to do a few days of work at the salon and can’t be more surprised to run into him at a gay dance club the next night. Although Gareth is friendly, Jules is disappointed when he turns down an invitation to dance. Assuming he is not Gareth’s type, Jules gets on with his night, but when a bathroom hook-up turns out to be more than Jules bargained for, Gareth swoops in like a knight in shining armor. When the two meet up again at work on Monday, Jules is determined that it will not be the last time they see each other and takes matters into his own hands. Although neither man can imagine why the other would find him attractive, they agree to a dinner date that evening. Will Gareth the soft-spoken bear and Jules, the outgoing ball of energy continue to hit it off or are they both too different for it to work out?

While the story itself unfolds over only a few days, I was totally taken by both men from the start. From their awkward beginning to the simmering tension of their first date, we learn a lot in a short time and I wanted nothing more than for them to find their match in each other. There’s more getting to know you than getting it on here, but the attraction is palpable and when they do get to the sex it’s both tender and hot! Who knew a dinner date of burgers and fries could be so sexy? A quick epilogue checks back with the men a month later and caps off another completely satisfying short from Jay Northcote.