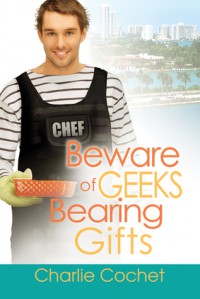 Short but sweet, if Charlie Cochet ever wants to write more Spencer and Quinn I’ll be ready to read it!

After seven years on Miami SWAT, Quinn is injured in the line of duty and stuck in his apartment recovering and growing crankier by the day. His large family means well, but they are driving him crazy. New Jersey transplant Spencer has been secretly crushing on his next door neighbor for a year now. With a little push from his friend and neighbor Danny, Spencer is determined to help Quinn out while he recovers, even though Quinn probably doesn’t know Spencer exists. His first attempt ends in near disaster, but Spencer knows the way to a man’s heart is through his stomach and puts his cooking talents to good use.

Quinn is pleasantly surprised as he gets to know the awkward neighbor he never gave a second thought to. As Spencer quickly becomes an important part of Quinn’s daily routine, Quinn’s meddling family and co-workers are either trying to push them together or pull them apart. When Quinn’s “friend” Javier goes too far, Quinn will do anything necessary to save the relationship.

I read this in one sitting and had a smile on my face almost the entire time. Spencer has an inner strength that is at odds with his klutzy exterior. He is funny, caring and a bit insecure, but he is not going to let anyone walk all over him and not going to change anything about himself, including his superhero t-shirts and underwear. Quinn’s stubborn tough guy exterior is no match for Spencer’s charms or brownies.

The flirting starts almost immediately and the sexual tension is thick, but the men spend a lot of time getting to know each other. I loved their back and forth and thought that Charlie Cochet did a great job in developing a friendship first and really making me feel like I got to know the men before moving the relationship to the next step, something I don’t always find in short stories.

Quinn’s large Cuban family, especially his mother, is like a whirlwind, descending all at once and jumping loudly into his business to add some wonderful moments of horror for Quinn while leaving Spencer a bit shell shocked. The other members of his SWAT team that Quinn considers friends are a mixed bag, with one particularly vile member looking to cause trouble and testing Quinn and Spencer’s new bond.

There was nothing I didn’t like about this story and I could have easily read much more. It was a perfect blend of humor, great characters, a little bit of drama and some sweet, sexy times.