If The Seas Catch Fire 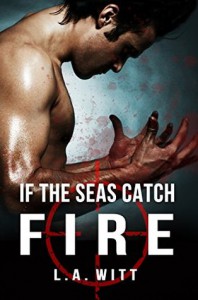 I’ve read a lot of L.A. Witt and this story may just be her best to date.

Dom and Sergei have both become the men they are today as a result of the brutal mob culture that has a stranglehold on the town of Cape Swan. Dom Maisano is fully entrenched in the family business as an accountant and as an under the radar hitman, as a result of his Uncle Corrado’s manipulations. He hides his homosexuality, knowing full well if anyone finds out it will cost him his life. The family’s image is everything and as a made man and nephew of the boss expectations are high. Dom hates what he has become and knows the only way out will be death, either at his own or another’s hands.

Sergei has spent years of his life crafting and executing a plan to get revenge on the mob families that took his family from him as a child. His job as a dancer in a gay strip club is the perfect cover for his more important work as a contract killer for the three families running the town. Few know he is the feared “Georgian” and even fewer know his real name. When the man he saves from being beaten by two mob goons turns out to be none other than Dom Maisano, Sergei begins to second guess his decision not to kill the man when he had a chance. When Dom returns to the club, the attraction is strong and soon the two are carrying out a discreet series of hook-ups. Sergei thinks he knows everything about Dom, while Dom has no clue who he is dealing with. As violence between the three families increases and Sergei continues forward with his plan to wipe them out, the relationship between the two gets more involved and the story’s tension kicks into a high gear that doesn’t let up until the very end.

As I was reading I couldn’t help but imagine that Ms. Witt must be a big fan of books and/or films like The Godfather and Goodfellas since the story had that classic feel. Although bare bones it is a simple story of revenge and mob politics, there is so much going on, it had me wondering how these two characters could possibly get through it not just with their lives, but with each other.

The chemistry between Sergei and Dom is explosive, whether it’s a lap dance, the simple act of kissing or hot and hard sex. I wanted nothing more than to see them ride off into the sunset after a satisfying and well deserved bloodbath unleashed on those who needed to pay for the horrors they inflicted on the two of course. Did I get my wish? You’ll have to read the story to see, but once you start you probably won’t want to stop.

Sergei is an amazing character. Presenting a bleach blond stripper to the world, he is a brilliantly calculating, stone cold killer. He has his reasons and they are heart wrenching. Nothing has deterred him from his plan, not even his unexpected hook ups with Dom. As much as the Maisanos tout “family”, it is Sergei who will bring you to tears with his devotion to what family they left him. While the two men fall for each other, you can see the inevitable coming and when that particular hit falls into Sergei’s lap, you really don’t know which way he will go with it or if he will allow his true feelings for Dom to change his carefully crafted plan.

Dom is so easy to care for from the start. He is conflicted about his feelings for his Uncle, the man who took him in even as he destroyed his life. His small acts of rebellion, helping the victims of the family business, bring him small comfort. He is at the end of his rope and going through the motions, just waiting for the inevitable end, Sergei becoming the only bright spot and source of happiness. One thing he knows is that he won’t let Sergei become another victim of his family even if it means walking away from one of the only people he loves.

The only thing stopping me from giving this a full five stars was that there were a few occasions where the same thought or explanation was repeated too often throughout the book. The story kept me on edge, watching as Sergei’s plan unfolded, putting him on an eventual collision course with his lover and wondering how it would all work out. Highly recommended if you like a good romantic thriller with the threat of danger and violence at every turn.