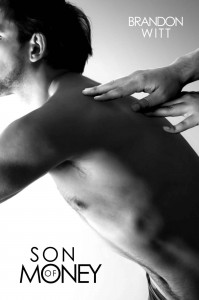 Check out my full release day review at Sinfully.

The Morgans are a family in the grand tradition of the Carringtons and Ewings (okay so I’m showing my age with references to over the top 80’s soaps). Rich and powerful and lording over all those around them, especially their own blood, with sticks firmly wedged you know where. Youngest son Randall made it clear years ago that he wants nothing to do with the control that came with their money. Cut out of the family fortune, he forged his own path as a photographer and masseuse, while continuing to acquiesce to some of his family’s wishes (showing up at benefits and participating in family events with all appropriate decorum) in order to remain a part of his beloved niece’s life. His personal and private life bear little resemblance to the formal, stiff, scheming and social climbing lives of his father, mother and brother.

After a rash outburst in an effort to further subvert his family’s control and make his niece happy, Randall finds himself at the local humane society attempting to adopt a dog, when out walks Noah, the man who gave him his first kiss. He last saw Noah when they were 13 and 14 years old, but he has never forgotten their one and only kiss and he has compared every man to him since, even without realizing it. They quickly reconnect and Noah is very forthright with his strong feelings for Randall and the conviction that Randall has always been the one man for him. Their relationship is as intense as it is easy and though Randall fights it more, he is pretty certain about Noah as well. As things have simmered for about 20 years I hesitate to call it insta-love, but things move very fast.

When rumors and allegations appear on a local website, Randall owns up to having sex with some of his massage clients. His father once again demands Randall do what he says to fix things or face the consequences. As the story grows and the allegations become more severe, Randall’s family and professional lives crumble. Noah is a strong steady influence, a lifeline for Randall, but even he may not be enough as Randall starts to withdraw and hide.

Though it sounds heavy, this is the lightest of the Brandon Witt books I’ve read. While things get seriously screwed up, the angst level is low as the relationship flows rather smoothly. It’s the rest of Randall’s life that provides all the drama. Money and power, and love and family are the great motivators battling it out in this story.

As far as the relationship between Randall and Noah, I really did feel they clicked. Yes, everything moved quickly, but I felt the chemistry between them. There were things I would have liked to have had explored more in-depth. Noah’s obviously been through a lot of change in his life and appeared to be a complex character, but we really only got to know him on a surface level. I also wanted to know a bit more about their relationship before their first kiss as teenagers. I wanted to feel the teen angst and know why that first kiss was so life changing. They were obviously both affected the same way, but I didn’t feel it come across. The relationship did work for me because I did feel their connection in the present, and the sex scenes were some of the most descriptive I’ve read from this author so far.

Moving onto the family, while Randall’s father is the biggest beast, the rest of the Morgan family is no picnic either. Sister-in-law Kayla is Randall’s best friend. It took me a while to warm up to her as she initially came off as a money hungry bimbo who can’t keep her mouth shut, but as the story went on and more of her character is revealed, she turned out to be a staunch ally and both smarter and stronger than I expected. There is also Dustin, his brother from another mother, who is following in daddy’s footsteps and spews venom at the rest of the family with seemingly not a second thought. Randall’s mother is just as bad as his father, maybe even worse knowing where she came from. It’s hard to believe he actually is a product of those two heartless people.

While the story has the soap opera family, it doesn’t completely devolve into soap opera hysterics (although there is a good face slap or two) until the Daytime Emmy-worthy last quarter of the book as Randall has a chance to confront the man who started it all and things just snowball from there.

I just adore Brandon Witt’s easy writing style. The scenes where Randall was working his photography shoots, especially one in particular with his niece and the dogs, vividly came to life and played like a film through my mind as I read. Though it had its ups and downs for me, I enjoyed the story. I wanted Noah and Randall to have that HEA and I wanted to know just who was involved and what their end-game was and of course see that those who deserved it got what I was hoping for in the end.