Under a Sky of Ash 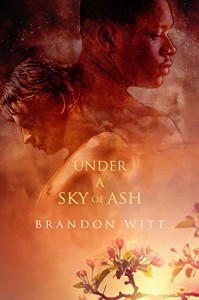 I’m trying to think of an emotion that this story didn’t bring out in me, but I think Brandon Witt touched on all of them. I’m just going to put it out here right up front: this story will make you cry. You’ll cry for the young boys in this story who had no choice when their lives were changed by the adults around them, you’ll cry for the men who worked so hard to move forward only to have everything shatter once again and finally you’ll cry when it all starts to come back together in the end. The story isn’t all doom and gloom and angst; there’s a lot of love, humor and hope underneath it, but it is heavy and touches on painful issues on the way to Isaiah and Ben’s HEA.

At 12 years old Isaiah’s first kiss with RJ leads to a tragedy beyond comprehension and he still carries the guilt of it with him twenty years later. Even years of therapy hasn’t stopped him from reliving what happened. He is now a special education teacher who has recently moved back to Colorado after 14 years away. He has a cordial relationship with his very religious family, whose past actions and blind adherence to their faith could have done even more damage to Isaiah, and spends most of his time with his roommate and co-worker Charity. When he meets Ben Woods there is an instant attraction as he’s just Isaiah’s type.

Ben is a mentor to Aaron, an impulsive sixth grader in the foster care system who also happens to be Isaiah’s student and the catalyst for their first meeting. Raised by a vile, hate-spewing grandmother Ben’s childhood wasn’t easy and he is lucky to have survived some of the bad choices he made. Meeting drag queen Mandonna aka Daniel and his partner Hershel literally saved his life. For the past 10 years they have looked out for and taken care of him better than his blood family ever did. Now Ben is crushing on Isaiah and is shocked to realize he wants to date the man, not just hook up with him. He’s not used to having to try and fumble for conversation and somewhat awkwardly maneuvers his way into asking Isaiah out.

I was immediately engaged with the main characters. Both Ben and Isaiah were forever changed by acts of violence when they were young. They are open and honest with each other from the start of their relationship, Ben especially feeling it important to lay his story out on the table on their first date. Although opposites in many ways, there is a physical chemistry between them and they have a great time together. Isaiah and Ben are falling hard and fast when their pasts again come back to haunt them and it’s really unclear whether they will ever be able to make things work regardless of how much they love each other. For Ben it’s not just the possibility of losing Isaiah for good, it’s also a risk to his hard won sobriety.

In addition to the main players, the cast of secondary characters is wonderful, adding to the emotional impact of the story.

“Thank you RJ. You’re pretty too.”

Those words are so sweet and simple, yet they crushed me every time I read them. They are the representation of how something so beautiful ended in so much pain and grief. I think I shed a tear every time RJ was on page. The polar opposite was true for when either Leslie or Dotty made an appearance. There is not one redeeming quality between the two of them (and I will admit that I have trouble with the way the story with Dotty was resolved). On to the happy end of the spectrum though, Mandonna/Daniel and Hershel are heaven sent. Mandonna (or “momma” to Ben) brings a bit of campy fun and is fierce with a stiletto while Hershel is the no-nonsense, straight talking side of the equation. They readily adopt Isaiah into their clan of construction worker meets drag queen crazy. Aaron is a pretty perceptive child and obviously loves both Ben and Isaiah but doesn’t know just how to show it without lashing out and causing trouble.

The story is told through alternating points of view and flashbacks and it works well to bring out the stories and mindsets of both men. All the characters feel real and the writing is straight forward. The story flows well, with some unexpected surprises and some pretty shocking moments. This was the second story I’ve read by Brandon Witt and he has found himself a place on my must read list.

Under a Sky of Ash is a story of surviving unimaginable loss, making family, finding love and letting go in order to move forward. There is so much more I could say about the story, but that would just deprive you of the pleasure of experiencing it for yourself. If you want an easy, sex and love conquers all as we ride off into the sunset story, this is not the book for you. If you’re willing to put in the effort and live the ups and downs Isaiah and Ben struggle through for a hard won happiness, this book won’t disappoint you.