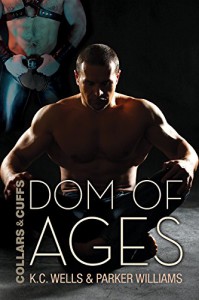 I didn’t think I could like another couple in this series as much as Alex and Leo from An Unlocked Heart. Peter and Thomas (Trusting Thomas) came very close, but K.C. Wells and Parker Williams proved me so wrong with how much I fell in love with Jarod and Eli. Age differences abound in the series but now the roles are reversed with sub Jarod 20 years Eli’s senior.

First, the cover is just beautiful. It reminds me of the first time Eli sees Jarod, kneeling in the club amongst the younger “subs”. Jarod is still grieving the unexpected death of his Master and lover Phillip four years ago. They were together for 24 years and Jarod is lost in his grief and depression, wandering around their large home and keeping it as he did for his Master. Even his mother urges him to get back out and find someone to serve. Jarod knows he is “too old” for the clubs, especially since he is truly looking for someone to serve, though he gives it a try and returns to Spitfire, the club he used to go with Phillip. Over the years he’s been away, the scene has changed so much. The younger subs are different and both the Doms and subs are scornful and mean, ignoring or ridiculing him. Eli, however, sees perfection. Eli is 30 and is looking for a true sub to serve him. He is tired of the way the club has changed and the subs that are there just for recreation. When he sees Jarod’s hopefulness dashed by a Dom, he goes for it and takes him home.

While Eli is enthusiastic and serious about wanting a sub to serve him, he is not very good in the execution, leaving for work early the next morning with Jarod at his house receiving no real instructions or attention to his needs. Having never had a sub for more than play, Eli really doesn’t know what to do. Luckily he has his friend Ben (from Someone to Keep Me) to give him guidance. Ben knows what Eli is looking for and has been trying to get Eli to come to Collars & Cuffs for some time now, but it is not until a horrifying experience when he brings Jarod back to Spitfire that Eli takes Ben’s invitation.

“I held on to him tightly. He was mine, and I’d be damned if I would lose him.”

This moment is a turning point for both men and we are treated to seeing Jarod find a place where he is accepted and he can be himself. I’ll admit while Ben and Scott’s story wasn’t my favorite of the series, Ben seems to be wiser from his experiences and was a great support to Eli, while his sub, Scott, finds something special in the relationship he develops with Jarod.

Jarod’s grief and need for a connection just broke my heart. Shattered it. The authors did such a good job in getting across his feelings of hope and despair, I was lost in it. Jarod not only has to deal with his grief, but he also finds he is facing some new issues revolving around the large age difference between Eli and himself. Jarod has so much to overcome, I found it fitting that Eli is relatively “uncomplicated”. While he needs help learning how to be a good Dom for Jarod, he has no major hang-ups or serious outside issues so he is able to fully commit to their relationship and his own growth as Jarod’s Dom.

While Jarod’s passion is service, he and Eli also explore a variety of kinks including sounding and wax play. Their connection is palpable, whether it’s a tender loving moment or one of the intense, kinky demonstrations or scenes, these two burn up the pages with their chemistry.

It wasn’t just the scenes between Eli and Jarod that pulled on my heart though and without spoiling anything, I found myself completely broken by a scene between Jarod and one of the young subs late in the book (when you read it you’ll know it). While a lot of Jarod’s story is heartbreaking, he really does come back to life at Collars & Cuffs. There is also happiness and joy as Jarod finds that his age isn’t always the barrier he thinks it is and he soon holds a special place with the subs we’ve come to know throughout the series.

I know I’ve mentioned a lot of the prior books, and all the characters show up here, but if you haven’t read them yet, you can jump in here if you just can’t wait to read the rest of the books. Both Jarod and Eli are new to the series and their story can be read on its own, though regular readers will have more of an appreciation for all the secondary characters, especially Peter who has come so far since his first appearance.

I can’t say enough about the wonderful job K.C. Wells and Parker Williams did with this story. It was beautiful on so many levels and has secured a spot on my favorites list. After Jarod and Eli’s happy ending is secured, there is a brief set up for what will be the final story in the series, and I know as much as I’m looking forward to that book, I’m really going to miss this group of characters. That’s what re-reads are for though, right?