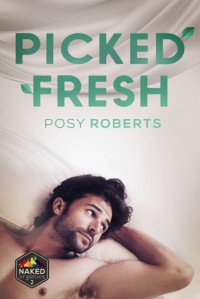 I really enjoyed the first book, Farm Fresh, which introduced the members of the commune at Kaleidoscope Gardens and this picks up right where the first story left off, with everyone on their own bit of shaky ground. Hudson is about to head off to visit with his estranged mother to settle his grandmother’s estate and is holding back his feelings when it comes to Jude; Jude is exhausted from school, counseling and his duties on the commune and is also emotionally exhausted trying to figure out what’s going on with Hudson; and Leo is pondering what to do with his future as he worries about everyone else around him and Charlie worries about him.

Jude has been making great strides with both his therapy to deal with the damage his parents inflicted and with his sexual awakening, aided by the three other men in his house and the commune as a whole. Unfortunately, what Jude really wants is time with Hudson and that hasn’t been happening through both their faults. Lately Jude has been spending long days trying to get ahead with his schoolwork and keep up with his work on the commune, resulting in little time with Hudson. It’s really hitting Hudson hard as he feels their relationship is in limbo, with Hudson wanting so much, but afraid to push Jude or do anything that would make him feel trapped. Hudson is trying to stand by Jude and allow him to have his sexual awakening without getting in the way, even if it means Jude finds what he really needs with Leo and Charlie or someone else, but he can’t help the feelings of jealousy that are also arising. These thoughts always lead to Hudson’s fears of abandonment and losing his home rearing their ugly heads, especially with the tension he feels in the house and the impending trip to clear up the estate of the grandmother he barely knew, and deal with the mother who he hasn’t seen since running away at eighteen years old. When Jude surprises Hudson by insisting he accompany him on his trip, how could he possibly say no?

Picked Fresh really needs to be read after Farm Fresh and I would also urge you to read the free short origin story about Hudson (see link below). Although Posy Roberts gives enough backstory to understand his fears and why the commune is so important, I think you need his story to get the full effect of just how difficult life was for Hudson as a teen. Since the majority of the story takes place on the road, life on the commune takes a backseat here, but it’s never forgotten and Charlie and Leo still play a large part in supporting Jude and Hudson. For those who have read the first book and wanted more focus on Jude and Hudson, you will be very happy.

There are a lot of emotions at play in this book for Jude and Hudson. They both have opportunities to face those who treated them so badly when they should have been giving them love and support, and they do so in two very different ways. They also both have the opportunity to be open and honest with each other, to explore what they already know is great sexual chemistry and to find out if there is more than just that in store for their future. Jude and Hudson have so much in common, despite the gap in their age and experience, which is possibly why they find it hard at first to open up and communicate with each other about what they want going forward.

I really fell for Hudson in this story. While at times he seems so insecure and needy, he has plenty of inner strength and is really very self-assured. That’s never more apparent than when he finally is face-to-face with the mother who failed him so long ago. Hudson has become a man who will never compromise who he is and will fiercely defend those who mean so much to him and I absolutely loved the way he handled things.

Outside of the family drama, the biggest question is how does Hudson deal with his intense feelings towards Jude and how will he deal if Jude decides to move on with someone else. Hudson wrestles with that quite a bit as Jude continues his sexual awakening and discovery of just what he likes and how to get it without shame. This trip provides Jude with plenty of time to explore some kinks and Hudson is more than willing to give Jude anything he wants. That works both ways though as Jude has come so far since the start of book one and he is just as willing and determined to be there for Hudson in any way he can, even if Hudson doesn’t or won’t realize it.

I’ve really enjoyed Posy Roberts’ writing in these two books. Just like the first story, I could picture myself right there in the rainbow bus on the road with Jude and Hudson. I love a good road trip romance since it offers endless opportunities for the characters to get close and open up quicker than during their day-to-day existence. This story did not disappoint and the trip was just what Jude and Hudson needed in more ways than one. I’d recommend this series to anyone who has an open mind when it comes to non-monogamous relationships and wants a setting that’s a little different from the usual. There is definitely a happy ending here, but I’m hoping this isn’t the last visit to Kaleidoscope Gardens.