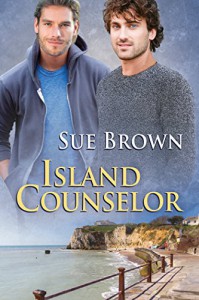 Both Logan and Nick are adjusting to big changes in their lives after incidents that put their jobs and careers on hold. Nick, injured while working as a fisherman and Logan injured while living and working as a counselor in London. When Logan comes upon Nick on the beach, obviously in pain, he offers his assistance and advice, which doesn't initially go over well, but eventually results in Nick making a move on Logan. While Logan finds Nick attractive, he’s not interested in just a hook-up, but tells Nick to call him if he’s interested in more, then is surprised when he does just that. Logan has baggage and isn't convinced that Nick would want a relationship, but as their first date extends into spending the day together, Logan finds himself really taken with the man. As they fall into an easy and comfortable friendship, working towards more, Logan is going to have to make some big decisions that could change his life as he has known it.

Nick has lived his whole life on the Island while Logan has used it as a vacation spot and now as a hideout, not sure if he can ever return to his life and practice in the city. Logan is suffering PTSD but refuses to get help (even though as a counselor he knows he needs it). He doesn’t trust easily and has other issues from his past he hasn't resolved, but he does ask his friend Jeff to act as a counselor for him (Jeff is a doctor and one of the main characters from the prior book). Logan worries about everything including the fact that Nick is bisexual, that he thinks Nick is only in it for a quick hook-up, and even though he’s pretty certain about his future plans, he worries how it will affect others if he doesn't go back to London.

Nick is a straightforward, no-nonsense type of guy. Once he gets a chance with Logan, he is undeterred in his determination to with the man over. With neither man working, they wind up spending almost all their time with each other. Logan wants to move slowly, but that resolve doesn’t last too long in the face of Nick’s obvious attraction to him and his clearly making his interest in Logan known. Other than Logan’s counseling of Liam and his sessions with Jeff, and Nick’s physio appointments that Logan and Nick’s mother insist he attend, the men quickly become inseparable. Both need comfort and it's not hard to understand how they quickly come to depend on each other’s daily presence. In the matter of one week where the two spend every moment they can together, Nick becomes very important to Logan, but he fears his baggage will be a burden on their new relationship.

Although this is the second in the series, and part of the bigger world including the Isle stories, it can be read as a standalone, though characters from both series return. Since Logan is Liam’s counselor, he and Sam ([b:The Isle of... Where?|14779553|The Isle of... Where? (Isle of Wight, #1)|Sue Brown|https://d.gr-assets.com/books/1338845099s/14779553.jpg|20432602]) again have a pretty significant secondary role. There is a bit of action at the end of the book, but like the first in the series, the story is firmly focused on the relationship and Logan’s healing and moving forward.

I liked that they both acted like adults in the relationship, outside of the entertaining bickering. Other than Logan’s difficulty dealing with and talking about his past and his concerns about whether Nick is looking for the same thing out of their new connection, the two really communicate well. There are no big misunderstandings and both men are incredibly supportive of each other. Logan is quickly embraced by Nick’s friends and family, who become part of his support system.

The story itself takes place in little more than a week and I was a bit concerned at the end that some things seemed to be resolved rather quickly, but the Epilogue, which is set a few months later, left me satisfied. Overall, like the first story in the series, this book was a calm, low angst look at the formation of a new relationship, between two men who outwardly have little in common, but have an innate understanding of each other.