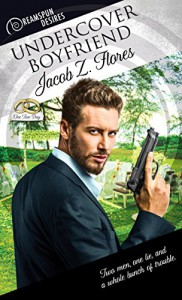 This was a trope-tastic, no angst, ultimately sweet story from Jacob Z. Flores. This is the first Dreamspun Desires story I’ve read and it definitely harkened back to the old school romances I used to sneak read as a young teenager. This one covers the fake boyfriend and undercover FBI agent hiding out tropes and, with tongue firmly planted in cheek, it was a lot of fun to read.

Marty is an insecure, nerdy, recently dumped comic book artist, with a penchant for making up fake people to get himself out of uncomfortable situations. His latest is fake boyfriend “Tim”, a successful underwear model. The only other person aware that Tim is fake is his about to be married sister, whose fiancée happens to be his ex’s best friend. Now that it’s the wedding weekend, and his ex is bound to be there, things are getting awkward. While his sister knows the truth, his meddling mother does not and Marty is not sure whether to fake breakup with Tim before the wedding or keep up the charade.

When super sexy, undercover FBI agent Luke sees Marty walk into a door at the bar he’s going to meet his contact in, he offers him a hand up and is soon on his way. When his cover is blown, Luke needs to make a quick escape and of course, runs right back into Marty. The two come to an agreement that Luke will pose as “Tim” for a few hours to get Marty’s family off his back, which will also allow Luke some time to lay low from the drug cartel’s men and figure out his next move. So what if Marty thinks he’s a car thief. Thus begins a mutually beneficial arrangement that soon turns into so much more than Marty or Luke ever expected.

This book is pure escapism, full of romance, danger, lucky coins, implausible situations, meddling family, sexy FBI agents and lots of superhero t-shirts. It’s fast-paced and at times just shy of feeling over the top, but the two charming MC’s and the light touch of Jacob Z. Flores (who I imagine had as much fun writing it as I did reading it) kept it from going over the edge.

Everyone is keeping secrets in this book and you know at some point they all have to come out. With all the festivities surrounding the wedding, you just know that they’re going to be revealed at the worst possible time. With all the murder, betrayal and hiding going on over the span of 48 hours, it may be hard to believe there would be time for Marty and Luke to form much of a relationship, but then again, the tense circumstances and life or death situations that keep arising force the men to lay their lives in each other’s hands. The two have good chemistry as they side-eye each other and try to keep their attraction under wraps. Luke’s been holding himself back from romance for as long as Marty has been a doormat and I enjoyed watching them both change their ways. If a romance that happens in a 2 day period can be a slow burn, this one is it.

There are several side characters that I really did enjoy and a couple that I despised. Obviously, Marty’s smug, horror show of an ex, Christian, is on the despise list, but I also have to place Marty’s sister on that list as well. I don’t know whether she was intentionally written in such a way or it was just my reaction to her, but I found her character to be self-centered and rather bitchy. She treated Marty horribly, yet he did everything in his power to make sure she would have the perfect wedding. On the other end, Marty’s mother is a force to be reckoned with and even with all the predictable parts of the storyline, Jacob Z. Flores still kept me wondering about what side of the fence Luke’s partner Crispy was really on. I wouldn’t mind seeing his character again in the future.

This is what I would consider a great beach read. Fast-paced, with a bit of action and suspense, fun dialogue and a sweet romance (the Epilogue might just give you a toothache) that will keep you engaged and bring you a few hours of enjoyment.