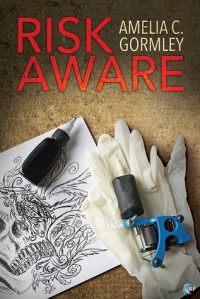 Geoff isn’t so much a submissive as a masochist. Robin considers himself more of a dominant than a sadist, but he is willing to change the way he does things. He sees the hemophilia not as a weakness (as Geoff often does) but just another risk to be take into consideration and accommodated when they play. Geoff has quite a list of kinks he’d like to explore and Robin is very attentive to each and every one. The BDSM scenes were amazing and intense. I was exhausted after reading their first real session. The dirty talk is off the charts hot and Robin is very inventive with the ways he stokes Geoff’s desire for pain, fear and danger. The kinks explored include sensory play, humiliation and mind games using verbal “violence” and emotional pain as an alternative to physical pain.

It is quickly clear that the two are sexually compatible and enjoy spending time with each other, but there are so many other obstacles in the relationship that push them apart. Geoff has a hard time accepting that his condition doesn’t make him weak in Robin’s eyes and his instinct is always to hide it. Robin educates himself and is adamant about Geoff including him in all aspects of it, from prophylaxis to injury potential, to symptoms of a bleed. While Robin demands Geoff’s trust, he fails to be completely open himself and Geoff is so focused on his own issues, he’s never considered that maybe Robin has things he’s dealing with as well. Robin is very tough on himself, fearing that once again he may not be able to see what’s happening and catch onto things before they go bad as they did in New York.

I thought the relationship developed naturally moving from just sex to an intimacy neither has experienced before. Both men really grow during the story; Geoff struggling to accept that he can have a full life that isn’t defined by what he can’t do because of his condition and Robin needing to realize that he can’t control everything. The men of course, eventually pull it together and their strength as a unit really becomes evident when they see firsthand the possible implications of their play when outsiders become involved.

This story is a prequel of sorts to [b:Saugatuck Summer|20648477|Saugatuck Summer (Saugatuck, #1)|Amelia C. Gormley|https://d.gr-assets.com/books/1390963056s/20648477.jpg|39942295] where Geoff and Robin play a pretty substantial secondary role. If you haven’t read that one and want a look into Geoff and Robin’s future after Risk Aware ends, you should definitely pick it up.

I really enjoyed this story. The kink was top notch and the struggle of the men to trust and communicate was done just right without too much angst. I don’t think the author could have gone easier on their struggles and maintained a feel for the real danger of them not being on the same page at all times. Putting the kink and medical condition aside I enjoyed the love story and liked seeing the men just being together and building a level of comfort with each other. I highly recommend this for anyone who loves a BDSM romance and wants to experience one that is just a bit different from the norm.