Will & Patrick Meet the Mob (Wake Up Married Book 5) 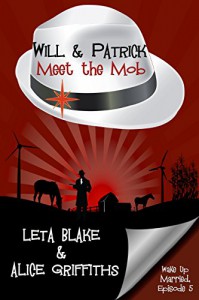 This is the penultimate installment in the fantastic series. If you’re reading this review I hope you’re up to date as there may be some series spoilers from the first four books. If you haven’t read these stories yet what are you waiting for?

Now we know that Will and Patrick love each other, this part could also be entitled Will & Patrick Try to Figure Out What to Do with These Feelings because neither of them is all that sure if or how they should let the other know. Patrick is all for telling Will immediately, but he’s just not sure what the right way to do it is. In this case, he wants to make sure everything happens the right way so Will truly understands that he means it. Will, on the other hand, has been allowing others to dictate his feelings for so long I can’t blame him for not trying to talk to Patrick about his new feelings and going along with what Patrick said in the beginning about not wanting feelings involved, even though all evidence points to Patrick having huge feelings for him.

Before the guys get too touchy-feely though, there is the problem of where the last book left off: Patrick on his knees while Tony Molinaro (aka Will’s hot Mob Daddy) holds a gun to his head. I’m not sure how to feel about Will’s father.

“I prefer to drop in, wreak havoc and get the hell out of Dodge.”

He definitely brings big trouble, but he also brings some words of wisdom. I believe he truly does love Will and wants the best for him. He may not go about things the right way but in his own twisted way he means well. He also brings out a side of Will I’ve been dying to see and that only seems to grow: the protective, possessive side that would have him jumping in front of a bullet for Patrick, both physically and emotionally.

“Seeing him on his knees like that, helpless and wild-eyed, has awakened something in Will he’s never known before: a violent possessive protection. If his father had hurt Patrick – no, if he ever hurts Patrick, Will’s not sure what he’ll do, but he knows it’ll be ugly and no one involved is coming out alive.”

This event has the roles reversed for a while with Will being the strong one while Patrick’s vulnerability is at the forefront. The way Will stands up to Tony without showing fear and defends Patrick makes it clear to everyone just how much he is invested in their relationship. It even carries over to his dealings with Kimberly, who still isn’t going to win any mother of the year awards, but who manages to maybe make herself understood a little bit more especially where Patrick is concerned.

Now back to the touchy-feely. Since the dam holding back Patrick’s feelings has cracked, he can’t stop them from flowing and he no longer wants them to. He is opening up to Jenny and is trying to figure out just how to tell Will that he loves him, getting sappy and emotional.

“I want to know how he’ll look with gray hair and wrinkles. What he’d name a dog. If he cries at weddings … If he’d cry at our wedding. I can’t remember. I don’t think he did.”

One night, Patrick stumbles onto what he thinks is the perfect opportunity to tell Will he loves him but, of course, things don’t go quite the way he hoped. The sex, however, is out of this world as Patrick continues to help Will live out his fantasies and tries to banish the lingering shame Will feels about exploring his kinks.

In addition to everything else, there is still the added stress of the lawsuit against Patrick that’s preventing him from working and the fact that everything about their future is up in the air. Will’s diabetes has been getting worse and he is still fighting every day to not take a drink. He is also concerned that his feelings for Patrick amount to replacing one addiction with another. Patrick also sets the record straight with Will about what his being on the autism spectrum means, making sure Will understands that it doesn’t affect his ability to have the same feelings Will does.
Again, there were so many more highlights to this story including Patrick’s talks with Hot Mob Daddy, Will laying down the law with Kimberly, and seeing Patrick risking even bigger trouble with the hospital to reassure one of his patients. There is the same snark and sex and fun that all the other parts have had as well.

Of course the end of the Episode leaves us with another bit of a cliffhanger as Will gets some news that I don’t think anybody wants to hear. Although the final book’s title, Will & Patrick’s Happy Ending, assures us of good things to come, these men are going to have to do a lot of talking fast to get there. As a matter of fact, I’m pretty sure only one more book isn’t going to be enough. Maybe another two or three? Leta Blake and Alice Griffiths, are you reading this? Can you tell I’m not ready to say goodbye?