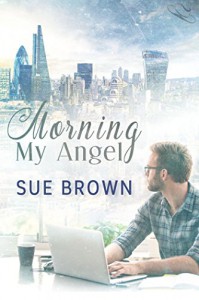 An accidental IM just after Josh began his employment at CDR was the start of an in-office online relationship with a man he knows only as “Charlie”, and who calls Josh “My Angel”, in a nod to Josh’s love of the TV classic Charlie’s Angels. While Josh has his suspicions that Charlie is a higher-up at CDR he has no clue who he’s been sharing the details of his life with over the past two years, but he knows that he has feelings for the man and is frustrated that Charlie seems to be avoiding all of Josh’s attempts to meet.

CDR is a private security firm and Josh is part of a three man team that is rounded out by twin brothers Gil and Landry. Josh describes himself as the brains of the team while Gil and Landry are the muscle. When a wealthy London hedge fund manager and silent partner in CDR goes missing, along with money from his clients’ accounts, Josh’s team is sent to London to investigate. Although that in and of itself is a bit out of the ordinary, the fact that the missing man is connected to CDR makes the whole case out of the ordinary as it puts the whole agency at risk. As if that isn’t enough, Josh also has the feeling that his team is being scrutinized by someone at CDR and they have been set up to work with a mysterious agency in London that Josh isn’t sure he can trust and seems to have its own separate agenda. As the investigation begins things quickly spiral out of control as new connections are made, old lovers appear and Josh becomes a target.

While the mystery is the main focus, there is a romantic storyline too as Josh finds himself attracted to Cal, his counterpart on the London agency’s team. Although his relationship with Charlie has a strong effect on Josh, Cal is physically there and Josh has to decide whether to pursue Cal or remain faithful to the promise of what may be with Charlie. As the investigation heats up, it turns out that there is more going on than meets the eye as more suspects appear, the bodies start to turn up and the possibility of a good time with Cal turns out to be a potential game changer for every aspect of Josh’s life.

Although the story started a bit slowly for me with lots of players being introduced and the setup of the plot, it picked up as the mystery took over. It was complex with numerous threads and possibilities bringing Josh and his team in deeper with every turn. There were one or two occasions where I was a bit confused as to what was going on with respect to some plot details that I felt weren’t initially fully explained, but everything was clear in the end. There were a number of twists and surprises and I was kept wondering whodunit until the very end.

Even the romantic aspect of the story wasn’t as simple as it seemed in the beginning. As things heat up between Josh and Cal, and the threats to Josh and the team become serious, they quickly force some unexpected confessions and choices. Josh is trying to balance the loyalty he feels to the mysterious Charlie, with the attraction he feels towards Cal, but with everything else going on that requires his attention there really is very little time for getting to know you dinners and romantic interludes, not that the two men don’t take every opportunity they can get to sneak in a bit of fun. The jealous streak the two men exhibit, especially with respect to one London LEO who is unhappily stuck working with them was entertaining and brought a bit of levity to the circumstances.

The ending is HFN and this being the first book in the series, it’s clear that Josh’s romantic relationship will be continued in future stories. As Cal and Josh really only spend a week together, we really didn’t get to know them that well. It is clear that Cal is a badass alpha underneath his posh exterior and has been through quite a lot. Josh is just as tough, but the choices he is forced to make and the stress of what happens in the story is bound to change him a bit. Things happened a bit quickly in the last chapter and Epilogue and I would really like to see the next story focus a bit more on the romantic aspect of the story. Overall though, this was a good start to the series, especially if you like romantic suspense with a heavy emphasis on the mystery.