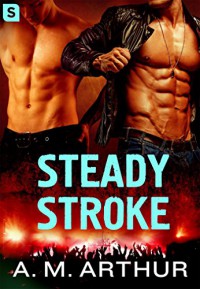 This is an A.M. Arthur book so it goes without saying that both Lincoln and Emmett have a lot of issues to deal with and there will be angst. That is what I expected and that is what I got, along with a couple that I absolutely adored together.

Lincoln has healed well from the car accident that occurred in [b:Body Rocks|29243627|Body Rocks (Off Beat, #1)|A.M. Arthur|https://d2arxad8u2l0g7.cloudfront.net/books/1456800731s/29243627.jpg|49487584] but he is still suffering with severe migraines, vertigo and depression. He also can no longer play guitar because of the effects of the head injury. Perhaps even more upsetting to Lincoln at this point in his recovery is that his best friend Dom is away traveling the country on tour with Trey; something Lincoln always thought he and Dom would have been doing together with their band XYZ. When Lincoln finally decides to get out one night, he finds himself at Off Beat where he makes a few new friends, finds his first hook-up since his accident and notices the skittish bus boy with the pale eyes. Not everything goes as planned that night, but all of it will have a huge impact on his life.

Emmett is 19, living with this aunt and cousin and working as a busboy in his aunt’s club Off Beat, just trying to do his job unnoticed and without a panic attack from being around so many people. Emmett has been through a lot in the past two years and as a result suffers anxiety, guilt and has trouble accepting himself. He just wants to escape his past and start living his life again. In addition to all of this, Emmett is harboring some secrets, one of which could have huge implications for not just him, but those around him. When sexy musician Lincoln offers him a friendly outing he fights his instinct to say no and accepts.

Emmett and Lincoln are so good together. They are both vulnerable, caring and compassionate and by each of them focusing on the other’s well-being, they are able to put aside their own worries for a while when they are together. When Lincoln finds it may be possible to perform again, Emmett encourages and supports him. When Emmett is having trouble putting his parents’ expectations and his own guilt and shame aside, Lincoln listens and provides some good advice. They find a shared love in music and seem to fit each other so well emotionally. When Emmett is ready to move forward, it's clear they are a great fit physically and romantically as well.

Something Lincoln and Emmett have in common is the fear that when they have something good, it’s only a matter of time before it will be taken away. This especially haunts Emmett and he definitely hits a few bumps in the road in accepting that he is entitled to be happy. He and Lincoln fall for each other pretty fast and as they get closer, Emmett realizes that he can’t think about a future with Lincoln until he tells him one last thing he has been hiding; one thing that could cause him to lose Lincoln for good. When Emmett’s final secret is revealed it absolutely devastates Lincoln.

Emmett is a complex character and for the most part, I liked the way A.M. Arthur handled his issues. However, there is quite a build up to the final revelation and I thought that the situation was forgiven a bit too easily for everyone involved. I would have liked to have seen it come out earlier and have spent more time seeing Lincoln and Emmett work through it. Instead, it is revealed close to the end of the book and while Lincoln is trying to work through his feelings, his meddling friends and bandmates are jumping into action to push along a resolution.

Other than that, I really did enjoy this book. Though they fell quick, their relationship felt natural to me. I loved it when Emmett finally let go with Lincoln and the fact that Lincoln wasn’t even close to as awful as he seemed in the first book was a big, huge plus. His struggles with Dom in the first book made much more sense when you learn more about his family and how much he came to need Dom in his life.

You could probably read this as a standalone, but I think you might be missing out when it comes to some of the relationships, especially between Lincoln and the Bounds family, especially Dom. If you have read the prior book, almost all the characters from the first are back, except for one band member that remains mysteriously out of touch. If you like stories with musicians and a romance between two MCs that have a lot to overcome, give this story and series a try.