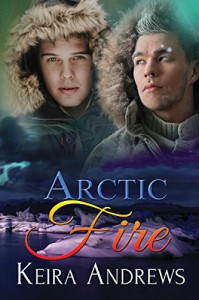 This is a short one, but Keira Andrews gets the job done with sexual tension, a beautiful but dangerous landscape, and two hurting men who suit each other better than they expected.

Things don’t get off to a great start between Canadian Ranger Kin Carsen and Captain Jack Turner. Jack basically lets Kin know that he thinks he’s wasting his time on this trip. He’s disgruntled about his job and it shows. Things have not gone well since his return from Afghanistan and his superiors don’t know what to do with him, but deep down he realizes he is there to do a job and he needs to do it well and regrets his initial dismissive treatment of Kin.

Kin is proud of the work he does and of his home and expects Jack to be a military professional, not the arrogant ass he meets that first day. Kin left his home in Nunavut to attend school, but the place is in his blood and he couldn’t imagine living elsewhere so he returned to work as a teacher and a Ranger. Being gay isn’t something that would be easily accepted in his community, but even that isn’t enough to make him leave although it means a life of loneliness and fending off neighbors’ attempts to set him up with a nice girl. That’s just part of the pain he hides every day.

Jack is suffering from nightmares and probably PTSD after what he went through in the desert and Kin is harboring some guilt and regrets of his own that still haunt him. As their journey to scout the potential for a new base begins, tensions start to ease. Once alone out on the tundra the beauty of their stark surroundings helps to quiet their minds and they let their guard down around each other. They manage to start opening up over a shared love of astronomy and Star Wars. Their simmering attraction doesn’t hurt things either.

A blizzard confines them to their tent and makes their journey even more dangerous and that’s when their lust flares. They can’t deny their attraction and the need for comfort and a connection that they have both been hiding for so long. As they give in to what they both want, uncertainties are pushed to the backs of their minds, but scars don’t remain hidden for long and their lust quickly turns into something deeper as they share some of their pain.

Keira Andrews’ writing is, again, wonderful here. The descriptions of the town, the Rangers and the landscapes set the scene and had me running for Google maps to check out this area of Canada that I knew so little about. The story is short but she managed to pen a well-rounded tale of not quite enemies to lovers, mixed in with some danger, some heat amongst the frozen landscape and two men who both deserve the comfort and companionship they found in their short time together. With a HFN ending, I’d be more than happy to read more about Kin and Jack who won’t have an easy road ahead of them of trying to make things work.