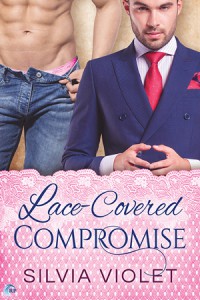 Adam Kingston is rich and privileged and very full of himself. He has always gotten everything he wants, except for his father’s respect and love. When his father dies and leaves half the company to the man he’d taken under his wing, Nate Thomas, Adam vows to do everything he can to get back the company that should be his alone. Unfortunately for him, it’s not going to be easy. With the company financially unstable and a board of directors demanding that Adam and Nate get their act together and work out a plan to save the company, Adam is less willing to compromise than ever. Nate is more of a fighter than Adam thought and it doesn’t help that he is hot as hell.

Adam’s glimpse of Nate’s lace panties in his gym bag and a hate kiss in the office starts off their sexual relationship. Both men have had a bit of lust for the other for years and they couldn’t be more perfect for each other in bed, even if they can still barely be civil to each other at the office. Adam can finally give over control and Nate is happy to be the dominant partner despite his outward charm, easy-going “hippie” nature and the lipstick and lace he wears. There are plenty of sex scenes, plenty of dirty talk and each one is very hot. Most of them also end with Adam’s fears of discovery of his bisexuality and fears of opening up to someone causing a hasty and rude exit.

Told from Adam’s POV, the story really consists of three characters, Nate, Adam and Adam’s best-friend Valerie, but Adam’s late father plays a big role as well. His actions before his death and a surprising letter received after it, really set the whole story in motion. Valerie is a fantastic secondary character. She’s a staunch ally and the only person who sees through Adam’s façade. She’s also the only person who tells him exactly the way things are, whether he likes it or not.

Aside from the smoking hot and sometimes kinky sex, I liked how Nate was able to wear Adam down and get him to start opening up, but also how he was not going to stand for Adam’s poor treatment of him. Nate may be easy going, but he was far from a pushover and that’s just what Adam needed in his life to realize what a complete ass he could be.

I did have a few issues with the story. We get the whole thing from only Adam’s POV which was fine since Nate is very open and straightforward about his feelings while Adam is very closed off. That being said, I would have liked a bit more background on the previous working relationship between the two MCs. They’ve worked in the same company and building for years, were in board meetings together, held high positions and each found the other to be hot. I get that the “knew” each other but didn’t really “know” each other, but I wanted more about their prior interactions considering how quickly they fell into a sort of relationship together.

Also, although Adam had been dealing with anxiety for years and mentions therapy, since his father’s illness he’s been having what he calls panic attacks. He talks about his fight or flight instinct kicking in and not wanting Nate to see him as weak. These episodes didn’t always come across as true panic attacks to me and he’s often able to completely stave them off or, more importantly, a simple word or touch from Nate can calm him. It sometimes felt like he was just having a freak out moment because he thought he did something stupid. I’m not an expert on anxiety, but it was sometimes a bit confusing and I just wish the situation was better explained or that there was some indication that he was still in therapy and doing something about them.

This is a very enjoyable, smoking hot, war of wills, enemies to lovers story with some light Dominant/submissive play. The story moved along quickly and I enjoyed the struggle between the two men both as far as saving the company went and in dealing with their growing feelings for each other. I think it will be a winning read for enemies to lovers fans.