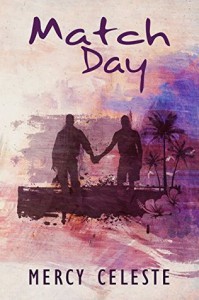 This is definitely Mercy Celeste light. The lightest I’ve read from her and I did have fun with it. It’s a friends to lovers story set on the honeymoon cruise Zack was to take after he married his best friend Brian’s horrible sister. Luckily the marriage doesn’t happen and Brian decides to join Zack on the trip.

Brian and Zack grew up together and shared an apartment when they went to college. Best friends with benefits, they also shared hand jobs throughout the years. They went their separate ways when Brian dropped out of college and moved to California. Brian has known he was gay since he was young, but never told anyone, not even Zack. He is still closeted to his family, but has been able to live his life out and proud since he moved. Just one reason he never plans to move back to Atlanta. Another secret he’s been keeping is that he’s been in love with Zack for years.

Zack really has a lot to learn about himself. Zack suffers from low self-esteem, not helped by the comments from his fiancée. He may be book smart, he’s a medical doctor waiting to find out where he will be placed for his residency, but he doesn’t think he has much to offer anyone. He also knows that he loves Brian but never considered that he may be in love with Brian. Zack struggles with his sexuality a bit, but mostly seems to roll with it. After all, he has been physical with Brian since they were teenagers. As Zack reveals more of his relationship with Ronnie and his past, it appears he may be demisexual, although Zack only labels himself as Brian-sexual.

Zack and Brian are both sweethearts and they are adorable together. During their 10 day “honeymoon” they play pretend husbands in public, they drink, they fight, they have sex and they get in touch with their true feelings for each other. Some of my favorite scenes were when they were just having fun together being tourists and you could see the deep connection they’ve built over the years outside of the overwhelming lust that seems to rule when they are alone in their cabin. There were times where I felt the story could have been streamlined a bit. There were some repeated thoughts and conversations, but not all of them bothered me. Some of the time it actually made it feel more real because seriously, Zack is a mess and Brian is afraid of losing Zack so the flip-flopping on things shouldn’t be surprising. These guys are working through something that had been beneath their friendship for years; Brian coming out and telling Zack he loves him and Zack just realizing and coming to terms with the fact that he’s made some bad decisions just to keep close to Brian. So some of that repetition worked and some was frustrating.

But of course, what would a Mercy Celeste book be without family drama? With the men out of contact for the duration of the cruise, it doesn’t happen until the end, but when it does it explodes! We see just how dysfunctional Brian’s family is and comments and hints dropped by Brian finally made sense. Even though Brian behaves quite badly toward the end, these two do get their happy ending and we do meet someone who I believe will be one of the MCs in the next book.

I’m a sucker for Mercy Celeste’s brand of angst and drama and WTF moments and while this was a lighter story there were still those elements. Despite some uneven parts, I enjoyed the story and will be looking forward to the next in the series.