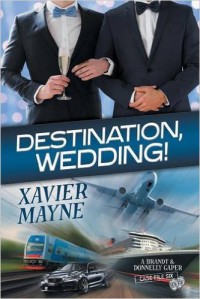 It pains me to write this, but I really struggled with the first 60% of this book (which is the longest in the series and really felt like it). At 38% I was close to giving up. Not that it was poorly written (Xavier Mayne's books never are), but I felt like I was reading two or three different stories and it was hard to be invested in any of them. With Brandt and Donnelly separated and not able to communicate during that time as they both find a way from the US to England for their wedding, and Bryce and Nestor also trying to make it there on their own there were three separate storylines.

Donnelly is on the cruise he was supposed to take with Brandt, and he is accompanied by Sandler, a diplomatic courier that helped him travel to the port. This part of the story was not bad as there is a bit of a mystery and Sandler is an interesting character. The two bond, they discuss how Donnelly basically went from straight to gay and committed and missed out on all the fun stuff, and Sandler's story kicks into high gear when everyone reunites at the end.

Brandt, who again is pondering his sexuality, is making his way to England with Keri, a woman he was introduced to by a mutual friend at the conference he was speaking at. Again, Kerry is not a bad character, but Brandt spends all his time basically whining. In the past few books I really enjoyed his struggle to define himself and shirk off labels, but here I felt like it was retreading old ground. There was nothing that pulled me into their story and I really found myself skimming it.

Then we have a smaller sub-plot as Bryce and Nestor screw their way from the US to the UK. Their road trip brings us a number of characters all of whom have their own stories and different sexualities. While Bryce and Nestor are usually a great comic relief, even they couldn't draw me in. Their first adventure was fun, but then I felt like I was being preached to about acceptance of those differing views. While that is fine, I didn't feel the need for it to be so heavy handed. Again, I wound up skimming.

When Brandt and Donnelly are finally reunited (about 67% on my kindle), along with their travelling companions, I got the story I was hoping for as the four set off to save someone very important to Sandler. I absolutely loved this portion of the story. Not only are Brandt and Donnelly working together, putting their policing skills to use, they are talking about their feelings to each other (and I hope finally putting an end to some concerns) and still trying to make it to the altar on time. Suffice to say there is a wedding at the end of this book.

I still love this series and Brandt and Donnelly, and I hope we get more since we're kind of left hanging on one important plot point. So while the first part of the book is probably a 2* for me the end was a 4* thus my 3* final rating.
Tweet