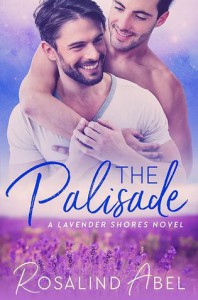 If you read my reviews you know I’m a fan of Brandon Witt’s emotional, angsty books. When I found out he was launching a new line of romance stories under the name Rosalind Abel (to distinguish from his gay fiction) I knew I had to check it out. So, for those of you who feared reading him because of his heavy storylines, this is the book you want to read. I absolutely loved it! It’s low angst, all out romance with plenty of hot sex and two MCs you will be rooting for from page one.

Andrew is a complete romantic. He is content with his life, living in the idyllic, LGBT-friendly community of Lavender Shore and can’t imagine living anywhere else. This has led to a string of failed relationships as many men can’t imagine staying in such a small, close community. Even Andrew’s best friend Gilbert, the son of another founding family, up and left as soon as he could.

Joel would seem to be the heir apparent to the Harvest Coffee empire, but not if you ask his father. The man tests him and degrades him at every turn. Joel is in Lavender Shores to score a location for their new Comfort Coffee flagship store. A few days to seal the deal and he’s gone. If he gets this taken care of it should prove to his father that he is ready to take his place next in line to run Harvest Coffee. It’s not going to be easy, Lavender Shores is unlike most places, and Joel is about to find out just how tough it will be, especially after meeting Andrew.

When Andrew and Joel first lay eyes on each other there is an instant attraction. Before their hook up is even starting, both men feel something more. There is insta-lust and insta-love, the sex is hot, Joel’s mouth is dirty and it all worked for me. These two can’t get enough of each other and I couldn’t get enough of them. As Andrew helps Joel scout out a place for his business, Joel is keeping a secret; he can’t let Andrew know just what the business plans are. The two grow closer, spending every minute of their few days together, falling in love. The insta-love perplexes the MCs but as much as their logical minds want to, they can’t deny that what their hearts, bodies and souls are screaming – they are meant to be together. But Joel is lying and when Andrew finds out it’s a devastating blow. Is running from Lavender Shores back to the fast-paced but unsatisfying life Joel lives the right move?

This book gushes romance. I was enraptured. I loved the MCs, who have off-the-charts chemistry, there’s plenty of tension, thanks to the lie that hovers between Andrew and Joel, and the setting is beautiful. Andrew is wonderful from the moment he appears. He knows who he is and what he wants, but he hasn’t quite reached out and grabbed it. Joel… I wanted to shake him. He is living to please a father that, at best, is indifferent towards him but mostly appears disgusted. He is confident in his business abilities, but his father keeps blocking him. The happiness he feels with Andrew is something he will never have if his father has his way. Frankly, Joel needed to grow a pair and reassess his life. I loved watching him fight that internal battle as he is clear that Andrew is everything he could ever want in another person, but just can’t quite remove himself from the path he has chosen.

This first book sets up the town and some of its inhabitants very nicely. Andrew’s, and his best-friend Gilbert’s parents, two of the town’s founding families, are quite entertaining. At times they bordered on over the top, but never pushed over that line. Gilbert, who couldn’t run from the town fast enough, has quite a story to tell, and will be the subject of the next book, and Andrew’s brother, the romance writer who needs a career boost was also prominently featured.

With a book a month planned through October, I can only hope that the momentum of this first story continues. The Palisade was emotional, entertaining and full of the romance and hot loving that I was promised. If you’re a romance junkie, I can’t recommend it enough - just go grab it.