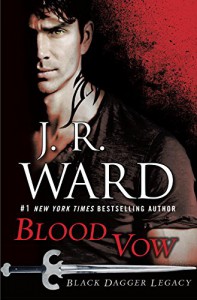 ***SPOILERS AHEAD FOR THE BDB AND BDB LEGACY SERIES***

Axe was the most promising story to me of all the recruits, he was dark, mysterious and kinky, but his character was watered down here. And where was Butch? He was a great mentor to Craeg and Axe in the first book but was nonexistent here.

Elise is a lot like Marissa and Paradise, a new breed of young female within the glymera who is not having the male domination bit and ready to strike out on her own. She is rather levelheaded (except when it comes to the final drama and not giving Axe time to explain as she jumps to conclusions) and rather likable, but nothing outstanding.

Axe is sexy and growly, but the chemistry between the two, once again, didn’t ignite. There also wasn’t much going on in their story to really test the relationship until the very end. What happened to the PI aspect? It didn’t seem that her father would just give up on that and then there were times Elise felt as if she was being watched, but that wasn’t resolved (unless I missed something or it’s part of a continuing story).

Rhage, Mary and Bitty’s storyline from [b:The Beast|25293695|The Beast (Black Dagger Brotherhood, #14)|J.R. Ward|https://images.gr-assets.com/books/1437025828s/25293695.jpg|45020928] continued, so if you haven’t read that you might be lost. I actually enjoyed the completion of that story, though the resolution was pretty much foregone. I liked Ruhn and although I hoped Saxton would get someone with a bit more of a personality as a mate (who knows, maybe Throe is still an option), I think Ruhn is different enough to make things interesting if these two become a couple, though I feel like this will be playing out in a secondary storyline to these series as well.

Lately I’m noticing that when I read JR Ward’s books, I’m more inclined to enjoy the secondary characters more than the main couple, as such I’ve decided that I don’t want Lassiter to have his own book as that would likely ruin his character for me. He has been a bright spot throughout the series and with his new role in this world is only becoming more so. I’ll be happy to have him play his life out as a secondary character so long as he gets a man of his own.

Looks like Novo and Peyton are next up (Novo seems to be quite like Xhex but I expect her to be watered down as Axe was - meh) and the mysterious Boone, on the sidelines for now, likely to follow.

Of course there are random pop culture references that again, add nothing. Do these people really only watch TV in their downtime and have no other way to express their thoughts and feelings other than comparing it to some B-reality show star?

One final gripe, for an expensive book out of a major publishing house, I was surprised to find a number of editing and grammatical errors.