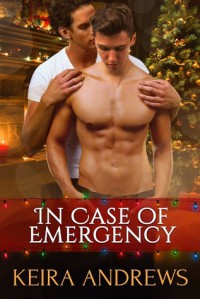 Daniel Diaz is an uptight HR director at an app company who is trying to change things up and move out of his comfort zone a bit. This leads him to try a relationship with a co-worker including a week away at a chalet for Christmas. Daniel has a feeling things could be a disaster since Justin isn’t the type he usually goes for, and boy was he right. Before he even starts his vacation though, he gets a call that his former step-brother, who he hasn’t seen in 10 years, is in the hospital and Daniel is his emergency contact.

Cole remembers his step-brother Daniel just fine.Their parents weren’t married long but when Daniel came to live with them (Cole was 13 and Daniel 18) he was Cole’s fantasy man. Cole’s crush hasn’t waned even though they haven’t had any contact in years and Daniel never seemed to care for him when they were younger. Having Daniel turn up at the ER and agree to take care of him while he has a mild concussion and broken hand is a dream come true, though he feels bad about crashing Daniel’s romantic getaway with his maybe soon to be boyfriend. Turns out that won’t be much of an issue.

Justin is pretty horrible and things don’t go as planned from the start as Justin has turned the vacation into an office party. Until Daniel can get rid of Justin and crew, he holes up with Cole as much as possible. He feels protective of Cole and it turns out Cole is a good listener and likes Star Wars as much as he does. Daniel is surprised at the connection he feels with Cole, but Cole is thrilled to have a chance to spend time with the man and basically fall even more in love with him. Once they get rid of the other people in the house the bond gets even stronger as they are free to enjoy their time decorating for Christmas, seeing the sights and just hanging around. I loved the snowy small village and mountain chalet setting which definitely gave off that holiday feel as Cole finds the perfect topper for their Christmas tree.

I had a few small issues while reading the first part of the story. Even though the storyline with the unwanted houseguests was a good way to get Cole and Daniel some alone time to learn about and start to trust each other, it did take over quite a bit of the story, leaving the rest of Cole and Daniel’s time together rushed. Also, even though Justin was not in his department, I find it a bit hard to believe that Daniel had no idea what the guy was like before this considering how open and laid back their office is.

This is a sweet tale of reconnecting at Christmas and taking a chance. Daniel is pretty uptight and not fun at all to start, but it’s clear that as far as Cole is concerned his feelings start to change pretty quickly from annoyed to protective to caring. It takes a while, but we are finally told why Daniel is a bit standoffish and the more time he spends with Cole the happier he becomes. Cole is a sweetheart from the start, if a bit awkward, but his desire for any kind of a relationship with Daniel is quite endearing. I enjoyed their bonding time and there was plenty of it as they hid away from Justin and company. What started off uncomfortable almost strangers, builds nicely to friends and when they finally do give in, the two have some sizzling hot times together.

The Epilogue set in the next year was super sweet and brought the story full-circle. Pick this one up if you’re in the mood for some angst-free holiday romance, with a bit of heat in a snowy winter setting.