Road to the Sun 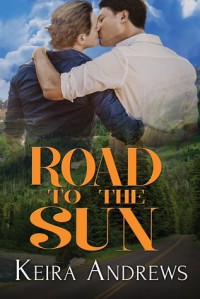 Keira Andrews’ easy storytelling style is on full display here. Once I started reading I didn’t want to stop and I devoured this story in two sittings.

At 25, Jason’s life revolves around raising his 8 year old daughter Maggie. He walked away from a privileged life and is working in a factory with no life outside of work and his daughter. He is determined to be the best father he can be and give his child the world which, at the moment, is a camping trip to Montana.

Ben loves his job as a Park Ranger. At 41 he is two years out of being dumped by his lover of twenty years, who also happens to be his boss so Ben can’t help seeing how the man is now living out all the dreams Ben spent two decades imagining would be theirs. Ben is stuck in a rut he can’t seem to pull himself out of until he meets Jason and Maggie Kellerman.

Jason is the first person Ben has had an attraction to since things ended with Brad and he can’t help flirting with the young father. Jason is surprised at his obvious attraction to Ben and it sheds new light on all the times he brushed off “appreciating” other men. He’s never had the time for anyone other than his daughter, always thought he wasn’t allowed to have anything, but Ben is making him want friendship and maybe more.

Their attraction simmers for a few days, but things flare quickly when Maggie is abducted by a killer and they both risk their lives to find her. When the immediate danger ends and they give in to their overwhelming emotions and their attraction to each other, things seem to be moving in just the right direction until Jason panics. Surviving the ordeal is just the start and Ben is only one of the surprises Jason needs to process as his orderly life has spiraled out of control in the span of one week. The fallout results in an emotional explosion and Jason runs, but neither man can stop thinking of the other.

The story starts off with an intense scene and then runs the gamut of sweetness, angst, suspense and drama. With the abduction dealt with in the first part of the book, there is plenty of time to deal with the repercussions. The first part of the book also sets up the easy relationship between Ben and Jason, who is particularly thrown by it all having really never had a relationship with anyone. Jason’s plight as a parent was totally relatable. His devotion to Maggie at the expense of any semblance of a life for himself was understandable and admirable, but he did have a heavy chip on his shoulder that caused him to become isolated and defensive when it comes to allowing anyone to help, even though help and companionship is what he so desperately needs.

Although there is a lot of focus on Jason, Ben is also stuck, not able to move forward and not completely dealing with his past. Ben is sweet and caring and just an all-around good guy. Seeing him have to make nice with his ex and the man he cheated with was gutwrenching. It made the impact Jason had on him even that much sweeter. It also turns out that Ben likes it dirty in bed and though there aren’t many sex scenes in the story, the few we get are fun and hot.

Children in books are always hit or miss for me, but Maggie was delightful. She did come off older than her 8 years, but it’s also made clear that she is highly intelligent and enthusiastic, so I was able to let that pass. She doesn’t hesitate to make her opinions known and I even enjoyed the few times we got her POV.

Most of the story is spent with just the two men and Maggie, but there are some good secondary characters; the kind you love to hate but then surprise you. After all, near death experiences don’t just affect those immediately involved.

The story has a bit of everything. There is plenty of angst and drama, but more than enough lighter moments to keep the story from getting dragged down. Likeable characters, well done suspense, and a romance that was meant to be, topped off with a bit of kinky sex and an Epilogue that will leave you with a lump in your throat and tears in your eyes all come together for a superb story I highly recommend.