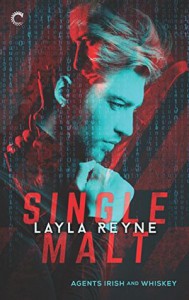 I spent a good part of last week finally binge reading this series. Hopefully I'll get up a small review for each but I'm giving the series overall 5 Stars!

The story starts here as two FBI agents, newly paired as partners, quickly start to fall for each other despite their better judgment, and it had me sucked in from the start. There’s a storyline that builds through the series, along with the romance and a smaller mystery that is wrapped up here. There are also the personal stories of both Agents Talley and Walker and their impact on the growing attraction. Aiden Talley (Irish) lost both his husband and his work partner in a crash that left him injured and out of work for 8 months and Jameson Walker (Whiskey) is a former college basketball star on his way to NBA who left the sport after an injury and is now working cyber crimes for the FBI. They both have issues, pasts and secrets, and both want the other, but try to control it – a losing battle for sure but it makes for good angst and tension for us. The moments of desire, jealousy and tenderness were so well built into the story, each one had me on edge waiting for the next.

I adored the growing relationship between the two, the mystery kept me wondering and the book left me wanting more. It’s not easy for the two men and there is angst, romance and danger throughout. The secondary characters are well-written too and add another dimension to the story. If you like action, crime thrillers, and a romance that has a lot of obstacles to work through you’ll love this story and be running for the next.
Tweet