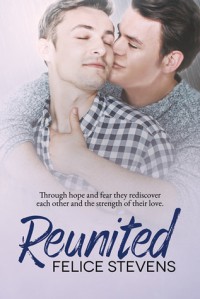 I have to say I enjoyed this follow-up even more than the first book. Jason and Ryder have been married for 5 years and love each other even more than when we left them at the end of [book:Rescued|27131821] (which you really should read first). Like every couple though, not everything is perfect. Jason is working long hours to provide for his family and Ryder just wants Jason home at night to spend time with him and their daughter. Jason is concerned about providing Ryder and Gemma with the life Ryder was used to, having grown up with money. Ryder just wants their daughter to grow up with her father around, unlike the way Ryder grew up with a father concerned more with making money than with raising his children. Unfortunately, Ryder has a tendency to just give in rather than risk a confrontation or disagreement. Another gift courtesy of his dysfunctional family.

When an author can bring me to tears with concern for a character, even knowing a happy ending is guaranteed, that’s always a good thing. Felice Stevens really captured the constant evolution a relationship goes through and how outside pressures and perceived roles can cause cracks and distance. In Ryder and Jason’s case, it’s not the complacency that can come with a long-term relationship nor the sudden medical crisis they are facing, but their unresolved personal issues that are causing strife. These two are still as hot and heavy and in love as they ever were. Little things that came up in the first book, that may have seemed resolved, but were really just pushed aside for necessity’s sake all come to a head here.

As with any of the author’s stories, family plays a big part here. All of Ryder and Jason’s family, by blood or love, are affected by a sudden medical crises. While the majority come together without batting an eye, the distance between Ryder and his mother becomes even more of an issue. Ryder’s mother’s actions are finally explained but are still, to me, unfathomable. The character is cruel and heartless and though the relationship she has with Ryder and his family changes somewhat, I was happy to see that it was dealt with in a realistic manner. The illness storyline was not a magic cure-all for the broken bits of that relationship.

I was completely emotionally invested from the start and it wasn’t the life or death situation that had me shedding tears, but the manner in which Ryder and Jason were struggling to keep themselves and their family together throughout the story. The men handle their medical crisis incredibly well and it showed just how deeply they love, support and rely each other for strength.

Felice Stevens catches us up on the whole cast of characters we first met in Rescued, and I’m sure I won’t be the only one clamoring for John’s story after his brief appearance here. Whether you wanted more of Ryder and Jason after Rescued or you’re a fan of seeing a committed, long-term couple work through tough times in their lives and come out even stronger for it, I can absolutely recommend this story.