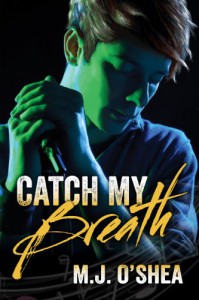 I have to admit this book was a good read although the whole time I was reading it I kept thinking it is basically, a YA version of Amy Lane's [b:The Locker Room|10821000|The Locker Room|Amy Lane|http://d.gr-assets.com/books/1303370354s/10821000.jpg|15734717] set in the music industry instead of sports with a lot less angst and sex. I had a smile on face throughout the book and enjoyed every page.

The two main characters Elliott (Harry?) and Danny (Louis?) are just too adorable for words. As the two boys find each other and fall in love,surrounded by the nicest guys ever to make up a boy band, life is great until, of course, Static becomes the next biggest thing. With that, their management reminds them that they must seem available to all the screaming tweens that buy their albums and merchandise and begins a campaign to prove their availability including fake girlfriends, manwhore rumors and anything else that will put the gay "rumors" out of the public's view. However, a group of savvy tweens continue their Twitter campaign to allow "Delly" to take the loving public.

The consequences of all the outside pressure slowly take their toll on the relationship between Elliot and Danny. How can they get through it with their relationship intact while keeping their vow to the other three bandmates not to jeopardize the group with their personal relationship? Guess you'll just have to read on to find out.
Tweet