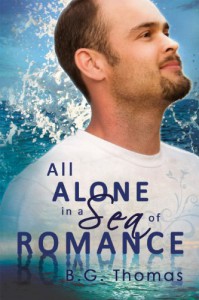 Jude is a 40 year old M/M romance writer who can't find his own HEA (his longest relationship lasted 9 months) so he has basically spent the last 20 years slutting around from guy to guy. Not that he doesn't want to be in love, there is just always something wrong the men he dates. Before heading out to the Romantic Voyages convention, his male model roommate lets him know in not so many words, he is not as young and in shape as he used to be. Imagine Jude's surprise when hot cover model Dino sets his sights on him that first night there. The night doesn't turn out quite the way Jude had planned, but sets off a weekend full of attempted murder, drag queens and sudden celebrity status.

This book was charming, fun and witty. The mystery aspect was not much as the villain is fairly obvious, but more just a device to get the relationship between Tommy and Jude moving along. Tommy is a lovable character and the secondary characters all added to the story, though I really found Jude's bitchy friend and coworker Jeannie just grated on me.

The focus of the story, told from Jude's POV, is on the building relationship between Jude and Tommy. It was nice to see two men who are not considered to be young, beautiful, perfect specimens. Both had their insecurities and baggage, with Jude initially shying away from Tommy's flamboyant nature. I enjoyed seeing them get to know each other before falling in love and into bed.
Tweet