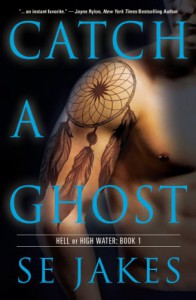 Going into this book you need to know that it is a story that is going to play out over the course of 4(?) books. So yes, there is an up in the air ending for the MC's Prophet and Tom and I can appreciate the aggravation of some readers who were not aware of this going in.

And yes, if you have read Cut & Run this book started out with some similarities, two alpha males being partnered who don't want to be partnered, playing head games to test out the other and dishing out nicknames and snark, but the book and it's two MC's quickly distinguish themselves. There is also a paranormal tinge to the story with Prophet seeing ghosts from his past and and Tom getting eerily accurate premonitions/gut feelings.

There is a lot of action and mysterious players. The men are investigating a murder of someone connected to Prophet's past, which turns out to be more than just a simple case. With both Prophet and Tom keeping secrets and finding it hard to trust each other, nothing is easy, especially once the two give in to their attraction and quickly building feelings. Both have so much baggage and unresolved dealings in their past that it's hard to believe they even got that far with each other, but the also both have a burning need to connect with another both physically and emotionally, no matter how much each denies it. I enjoyed both the writing style and the pacing of the story.

Add to all this the other employee's at EE (I need to know more about Mal and would love to see more Blue and Mick), a ticking clock on Phrophet's ability to stay out in the field, a mysterious downstairs neighbor, cage fighting, tattoos, piercings and some burning hot sex scenes, and I am sucked in. I enjoy a long story arc that I can really dig into and there are a lot of layers that have been set up. Glad I won't have to wait long for the next installment!