Someone To Keep Me (Collars and Cuffs #3) 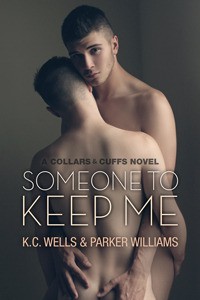 Anyone who follows my reviews knows that I am a KC Wells fangirl. As a big fan of the first two books in the series and with high hopes for this one, I was a little disappointed that Ben and Scott’s relationship didn’t grab me the way that Leo and Alex and Thomas and Peter’s did.

To start off I have to say that the cover of this book is gorgeous! It makes me miss reading physical books. I am a sucker for needy, affection-starved boys and I did love Scott even when he made my eyes tear up. He is 18 years old, has been sheltered and really emotionally abused by his parents who only care how he reflects back on them. Bullied to the point where he is now being home schooled, Scott isn’t allowed to see movies or watch TV and his only access to the internet is through his accidental discovery of a browser on his e-reader (used for textbooks only) and using wi-fi pirated from a local business. It is here he meets “JeffUK” in a chat room. Scott is so starved for affection he eventually accepts a plane ticket to England and plans to go live with Jeff. When things get worse with his parents, he runs off with only the clothes on his back and is lost when Jeff doesn’t show up at the airport.

Ben, who we met briefly in Trusting Thomas as a dom in training and bartender at Collars & Cuffs, sees Scott at the airport and, with the help of Leo and Thomas, gets him settled in a hotel room. After hearing how he was brought to England, Ben alerts the other men that something is not right. Although he has his own difficulties at the moment he agrees to care for Scott until other arrangements can be made.


I enjoyed watching Scott and Ben’s friendship grow, but it is soon obvious that Scott wants much more than Ben was ready to give. Taking care of Ben gives Scott great pleasure and all he really wants in return is to be cared for and needed. He has been cast off by everyone else in his life and when Ben grows distant and finally does the same, he is devastated. Luckily for Scott he develops a great support system in Leo and Thomas’ subs Alex and Peter. (Note to KC Wells, I would happily read a book of just those three boys they are so cute together! Not sure how Thomas could resist that puppy pile. )

Of course, after Leo and Thomas intervene, Ben eventually does take Scott on. The relationship transition from friends to D/s and lovers is what lost me a little. The fact that Scott is a virgin with basically zero experience with men was a big deal as a plot line, but the beginning of his sexual relationship and training with Ben felt glossed over. I wanted to see the early days of training and the build up of their sexual tension to set the tone for the friends to lovers transition. Despite that, once the two do get together it was something else!

I loved that we got to see the main characters from the first two books, especially Peter, who is still struggling but becomes a great friend to Scott. However, Leo and Thomas, the strong caring doms I grew to love in the last two books, seemingly dropped the ball on Ben’s training and Scott’s welfare and twice allowed things to deteriorate so severely. Ben also acted horribly, especially towards the end, considering he knew how badly Scott was treated by his family before coming to England.

The underlying plot does carry back to the story in [b:Trusting Thomas|18478271|Trusting Thomas (Collars and Cuffs, #2)|K.C. Wells|https://d202m5krfqbpi5.cloudfront.net/books/1378795247s/18478271.jpg|26150372], so it would be a benefit to have read that book first, but this one can stand alone. Despite this book not being my favorite of the three, I am looking forward to more and would really like to see how Jeff and Damian are getting along in their situation.