Chance to Be King 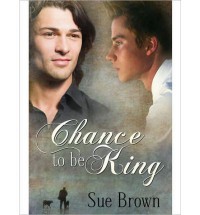 I'm a big fan of Sue Brown's books and enjoyed this story, although there were a few niggles. I can definitely see the progression of her writing from this earlier work to the more recent ones.

There is a bit of insta-love in this one as the majority of the story takes place over a two week period, but I did like the chemistry between the two MC's Eric (a closeted Hollywood action hero) and Thomas. There is a lot of mystery surrounding Thomas, although it sometimes seemed that even though Eric is wildly attracted to Thomas he wasn't all that interested in finding out about his life.

The two men share a flirtation over the first two days of Eric's vacation but a threat to one of them soon has them spending all their time together. When the two finally do get together they are hot. I liked the two men together and there is some fun banter between them (I especially enjoyed their afternoon of Bingo with the old ladies in town). Eventually, however, Thomas's past is revealed and comes back to haunt him. Other than some areas where the writing/continuity was a little off, this was a quick, enjoyable read.
Tweet