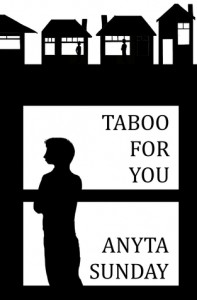 This was my first read by Anyta Sunday and it was a cute, funny, mostly fluffy gay for you story.

Luke and Sam were adorable. Luke's yearning for Sam was and his love and loyalty to him was palpable. Although his inability to just come out and be honest about things dragged on a little too long, I loved the fact that he would do just about anything to make Sam and Jeremy happy.

Sam was adorably clueless and very sweet in his desire to live out some of the reckless teenage years he missed out on by becoming a father at 15, in order to be better able to parent his 14 year old son Jeremy, as well as come to terms with his fast approaching 30th birthday.

Jeremy is willing to do anything to get more private time with his girlfriend, but will have to divert the attention of his parents. I'll give him an A for effort and creativity.

I liked the alternating viewpoints, but I did feel that it dragged a little as far as Luke's coming clean with Sam. I have to say when they finally, got their act together it was a beautiful thing. I also could have done without the teen sex scenes, but overall it was an enjoyable light read.

Thanks to everyone at Buddy Read Central. I probably would not have otherwise picked this one up.