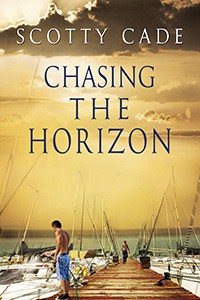 An enjoyable opposites attract story between two men so hung up on the idea that they don't do relationships, that they can't see one when they have it. Although this is a sequel to Sunrise Over Savannah, it would also work as a standalone.

Garner is continuing his sailing journey, having burned out and retired from his high pressure psychology practice, which had left him with a string of failed relationships. Hawken is jumping from one drunken one night stand to the next, not sleeping with the same guy twice. His tattooed and pierced exterior often puts people on guard, and Garner is no exception. Soon enough, the men find themselves with an unexpected and urgent physical attraction. Even better, neither of them is looking for anything permanent and with Garner just passing through they decide to have fun while it lasts.

Hawken's best friend Justin, along with Thompson and Hank (the two MC's from the first book), are along for the ride and are willing to help the two men see what they are blinded to as they hang onto past experiences. Justin has his own problems as well, that add to the drama and help make him an endearing character.

This book was definitely lower on the angst than the first one, and I enjoyed all the characters. It was good seeing Hank and Thompson settled in their relationship and enjoying some time with Garner again. Besides the main plot, I found myself really invested in Justin and would love to see more of his story in the future.
Tweet